To confirm life on other planets, we need to detect far more molecules in their atmospheres than we currently do to rule out non-biological chemical processes.
Lachlan Gilbert | UNSW Newsroom 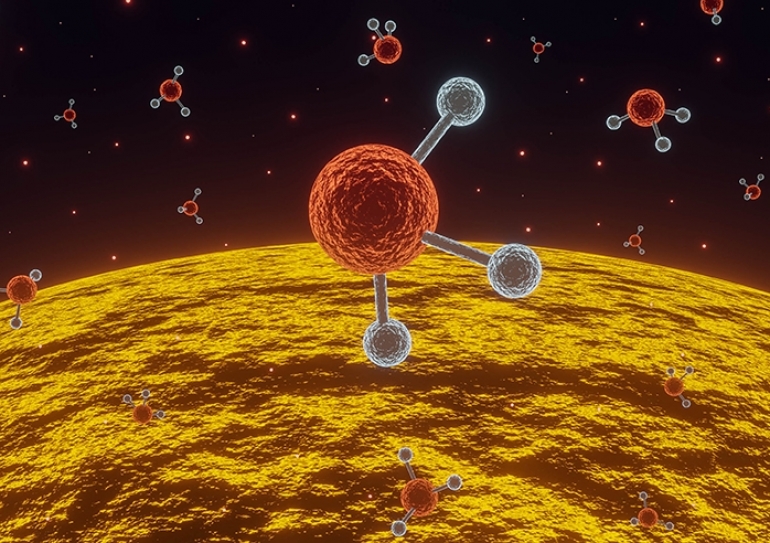 Phosphine detected in the atmosphere of Venus has scientists divided about whether or not it signifies primitive life on the planet. Image: Shutterstock

The search for life on other planets has received a major boost after scientists revealed the spectral signatures of almost 1000 atmospheric molecules that may be involved in the production or consumption of phosphine, a study led by UNSW Sydney revealed.

Scientists have long conjectured that phosphine – a chemical compound made of one phosphorous atom surrounded by three hydrogen atoms (PH3) – may indicate evidence of life if found in the atmospheres of small rocky planets like our own, where it is produced by the biological activity of bacteria.

So when an international team of scientists last year claimed to have detected phosphine in the atmosphere of Venus, it raised the tantalising prospect of the first evidence of life on another planet – albeit the primitive, single-celled variety.

But not everyone was convinced, with some scientists questioning whether the phosphine in Venus’s atmosphere was really produced by biological activity, or whether phosphine was detected at all.

Now an international team, led by UNSW Sydney scientists, has made a key contribution to this and any future searches for life on other planets by demonstrating how an initial detection of a potential biosignature must be followed by searches for related molecules.

In a paper published today in the journal Frontiers in Astronomy and Space Sciences, they described how the team used computer algorithms to produce a database of approximate infrared spectral barcodes for 958 molecular species containing phosphorous.

A summary of the team's achievements. Image: UNSW

As UNSW School of Chemistry’s Dr Laura McKemmish explains, when scientists look for evidence of life on other planets, they don’t need to go into space, they can simply point a telescope at the planet in question.

“To identify life on a planet, we need spectral data,” she says.

“With the right spectral data, light from a planet can tell you what molecules are in the planet’s atmosphere.”

Phosphorus is an essential element for life, yet up until now, she says, astronomers could only look for one polyatomic phosphorus-containing molecule, phosphine.

“Phosphine is a very promising biosignature because it is only produced in tiny concentrations by natural processes. However, if we can’t trace how it is produced or consumed, we can’t answer the question of whether it is unusual chemistry or little green men who are producing phosphine on a planet," says Dr McKemmish.

To provide insight, Dr McKemmish brought together a large interdisciplinary team to understand how phosphorus behaves chemically, biologically and geologically and ask how this can be investigated remotely through atmospheric molecules alone.

“What was great about this study is that it brought together scientists from disparate fields – chemistry, biology, geology – to address these fundamental questions around the search for life elsewhere that one field alone could not answer,” says astrobiologist and co-author on the study, Associate Professor Brendan Burns.

Dr McKemmish continues: “At the start, we looked for which phosphorous-bearing molecules – what we called P-molecules – are most important in atmospheres but it turns out very little is known. So we decided to look at a large number of P-molecules that could be found in the gas-phase which would otherwise go undetected by telescopes sensitive to infrared light.”

Barcode data for new molecular species are normally produced for one molecule at a time, Dr McKemmish says, a process that often takes years. But the team involved in this research used what she calls “high-throughput computational quantum chemistry” to predict the spectra of 958 molecules within only a couple of weeks.

“Though this new dataset doesn’t yet have the accuracy to enable new detections, it can help prevent misassignments by highlighting the potential for multiple molecular species having similar spectral barcodes – for example, at low resolution with some telescopes, water and alcohol could be indistinguishable.

“The data can also be used to rank how easy a molecule is to detect. For example, counter-intuitively, alien astronomers looking at Earth would find it much easier to detect 0.04% CO2 in our atmosphere than the 20% O2. This is because CO2 absorbs light much more strongly than O2 – this is actually what causes the greenhouse effect on Earth.”

“The only way we're going to be able to look at exoplanets and see whether there's life there is to use spectral data collected by telescopes – that is our one and only tool,” says Dr McKemmish.

“Our paper provides a novel scientific approach to following up the detection of potential biosignatures and has relevance to the study of astrochemistry within and outside the Solar System,” says Dr McKemmish. “Further studies will rapidly improve the accuracy of the data and expand the range of molecules considered, paving the way for its use in future detections and identifications of molecules.”

Fellow co-author and CSIRO astronomer Dr Chenoa Tremblay says the team’s contribution will be beneficial as more powerful telescopes come online in the near future.

“This information has come at a critical time in astronomy,” she says.

“A new infrared telescope called the James Web Space Telescope is due to launch later this year and it will be far more sensitive and cover more wavelengths than its predecessors like the Herschel Space Observatory. We will need this information at a very rapid rate to identify new molecules in the data.”

She says although the team’s work was focused on the vibrational motions of molecules detected with telescopes sensitive to infrared light, they are currently working to extend the technique to the radio wavelengths as well.

“This will be important for current and new telescopes like the upcoming Square Kilometre Array to be built in Western Australia.”